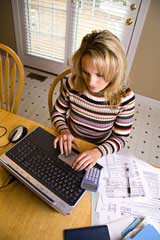 In an age of downsizing, layoffs, and the need for extra income, the idea of working from home can be very attractive. There's no long commute, you can work the hours you want, and if you believe the spam e-mails that land in your inbox, you can make a very good income. It's true that there are many legitimate work from home opportunities. But there are also plenty of scams, up to 300 at any one time, according to the Office of Fair Trading. This will help you sort the wheat from the chaff.

Perhaps the oldest of all these is the promise of making money stuffing envelopes. Apply, and you'll be asked to pay a registration fee. In return you receive advice on placing a similar ad to recruit others. It's a pyramid scheme, and a scam. Do it and you can find yourself prosecuted for fraud.

Home assembly kits require you to pay a fee for a kit. After you've assembled it and sent it in, the scammer rejects it as sub-standard, leaving you out for materials.

Home working directories claim to offer different work opportunities. But what you receive for your money is a directory of other companies with their own registration fees.

Those all demand money upfront (as do many others, including the medical billing scam, which is common in America), but bring no return. Much the same applies to product testing at home, reading books for money and data entry or typing at home. Be very suspicious of them all.

There are others that don't ask for money, although you still won't make a living wage. Making money completing surveys is a common one. Register (some sites ask for a fee) and you'll be contacted to take surveys, which do pay money. However, you won't even make enough to pay for your groceries, and often that's in "credit" for the site with which you've registered.

All of these scams have been around for decades, updated for the Internet age. One that's new, however, is surfing the Web for money. Again, the promise is big money. But once more, the chances of being paid are small. Surf Junky is one of the biggest of these, but many reports state that once a customer reaches a balance of $25, the account is marked for deletion, with the company claiming the customer has used illegal programmes to inflate their payout rate.

How To Avoid Being Scammed

What To Do If You've Been Scammed

About your only recourse if you fall victim to one of these scams is to report it to the Office of Fair Trading. Make sure you've kept as much information as possible, including addresses (street and e-mail) and phone numbers and notes of their promises and the reality. They will investigate and if possible prosecute the criminals. That said, it's unlikely you'll ever see your money again. Usually, the companies behind these scams just stop doing business, only to reappear with a different name and number within a matter of days.

People do make a living working from home. But it requires a great deal of work and self-discipline. They know there's no pot of gold at the end of the rainbow. Be careful who you do business with, and you too can be earning from your own house.