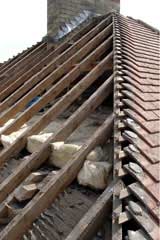 You hear about it, you see it on television - people who employ cowboy builders to work on their house and end up with a botched or uncompleted job that costs far more than they imagined, and which then takes thousands more to correct. But with some care you can avoid the nightmare of the cowboys in your house. It's worth remembering that 100,000 complaints are made every year in the U.K. against rogue builders.

One common approach of the cowboy is to knock on your door, say he's "working in the area" and that your roof, drive (or something else) needs work. Without a thorough look he offers a low quote, and perhaps says he has material left over from another job that he can use. His vehicle will look unprofessional, he won't offer a specific schedule for the work. His only phone number will be a mobile, and he'll ask for payment before he begins - in cash, to avoid paying VAT.

If it's a big job, such as an extension, you might find that the work goes on and on, with each invoice sucking more from your bank account without much visible progress. By the time he leaves - or you finally give up - your house will probably look like a wreck.

How To Avoid Cowboy Builders

In the event of a problem with a builder, you should initially try to resolve the problem between the two of you. In the event that doesn't work, there are steps you can take:

You can take the builder to County Court. If the amount is under £5000, it's a small claim, and can be dealt with quickly.

Report the builder to Dept of Trading Standards . There has been talk that they, along with the Federation of Master Builders, will publish a "name and shame" list of cowboy tradesmen.

If your builder is a real cowboy, he might have already left the area, and finding him to take to court could be extremely difficult. Even if you obtain a County Court judgment, you can only get your money back if the builder has it. It's worth remembering, too, that it takes no special qualifications or certificates to be a builder. Legally, anyone can call himself a builder and charge for his work.

Your home is, quite rightly, your castle. The simplest way to avoid problems with it is to take time in the beginning and find the right contractor. A low quote might seem attractive, but you could be buying yourself trouble.

Trying to Find a Reputable Tradesman?

If you're looking for more advice on how to find a reputable trades person, why not take a look at Finding a Reputable Tradesman on the www.saferhouses.co.uk website.
You might also like...