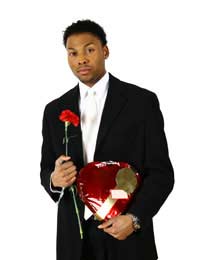 The gigolo is hardly a new phenomenon. The man who courts women, usually older than himself, and lets them pay for his needs - and possibly even pay him - in return for his attention has been around for centuries, and in all corners of the globe. In recent years, though, it's become more prevalent and open, if not always more socially acceptable. There are women who go on holiday quite deliberately seeking the attention of a younger man, and are willing to pay, in one form or another, for their pleasures.

It happens mostly in the Caribbean these days, especially in resorts like Negril. But back in the 1980s, Haiti was a place where the gigolo - almost always young, local men - could do well. Given the low wages in the area, it's perhaps no surprise that young men, often without work or marginally employed, would want to boost their incomes and enjoy a lavish lifestyle for a while.

A woman, alone, goes to a resort, often in Jamaica. At the hotel whilst relaxing, she's approached by a young local man. In general, the security guards don't stop the men, and if the woman shows no interest, the men drift away quickly. Some of the young men are hotel workers, who see a liaison as a perk of the job (and income boost). Although it's officially frowned up by the resorts, no one makes a move to stop it as tourism is a vital part of the economy. It's estimated that around 200 men in Negril work as gigolos.

The woman will pay for everything whilst the two are together, i.e. for the duration of her holiday, or as long as her interest lasts. Often they also give the men money. In return, they're lavished with attention and have young sexual partners.

Quite regularly a woman will form an emotional attachment to the man she meets. She might continue to send him money from home and plan more visits. However, to the men this is simply a job, and for the most part they avoid any kind of attachment. All that buys the woman is heartbreak, as it did for one in her 50s who returned to Jamaica a month after going home in search of her lover, only to find him with someone else.

Many in the local community, especially women, don't like the behaviour of the tourists. Not only does the blatancy offend their sensibilities, they're offended and angered that it's siphoning off many young local men from real relationships within the community.

The biggest risk, of course, is that of sexually transmitted diseases. The only place in the world with a higher rate of HIV infection than the Caribbean is sub-Sahara Africa. In Jamaica it's spread beyond high-risk groups into the general population - current statistics show between one and two per cent of the population infected, some 25,000 people. HIV/AIDS and Sexually Transmitted Infections are the second leading cause of death for both men and women in the age group 30-34 years in Jamaica, and one out of every two people living with AIDS has a history of sexually transmitted infection as a risk factor.

How To Avoid The Problems

The simple solution, of course, is to have nothing to do with gigolos. But it's also true that sex tourism in Jamaica by women is an established fact of life. For anyone who does succumb to the charms of a gigolo (and they live on their charm), remember the following things:

Scammed by a Holiday Romance?

Booking a Villa or Apartment That Doesn't Exist

The Bogus Travel Companies and How to Avoid Them