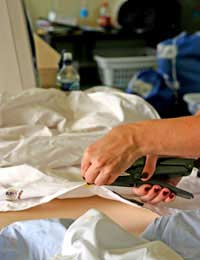 It's happened to almost everyone. There's a flyer through your door, or someone leaves a plastic bag. They're asking for household donations, anything from clothes to electrical items, which will be picked up, and you have the impression that your old goods are going to charity. But are they?

It might not be the biggest scam in the world. But according to the Association of Charity Shops, it's still worth over one million pounds a year. Far worse is the fact that the money you believed might help others is going into someone's pocket.

How To Avoid Being A Victim

If you're not sure whether the bag or flyer is from a real charity - the registration number you're given could actually be of a company, not a charity, or it's frequently just random numbers with no meaning, except to suggest an official licence - you can take the following steps:

How To Report A Fake Charity

The Control of Misleading Advertising Regulations, passed in 1988, is directly concerned with this type of scam. If you discover someone trying to perpetrate it, you can do these things:

Both the Office of Fair Trading and the Charity Commission take these crimes very seriously. Not only does it deprive the charity shops of a good slice of income, but a lack of public confidence in charities can seriously affect future giving.

Charity Donation Scams
Share Your Story, Join the Discussion or Seek Advice..
I am concerned about a charity collection bag from "Helping our Soldiers". Not a registered charity, only a mobile phone number. How can this sort of thing be stopped.
Waryone - 6-Aug-14 @ 12:01 PM
Title:
(never shown)
Firstname:
(never shown)
Surname:
(never shown)
Email:
(never shown)
Nickname:
(shown)
Comment:
Validate: