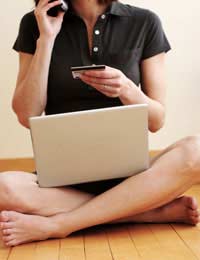 If you've used EBay at all, you probably know the tension of bidding on an item - and losing at the last minute. But what would you do if the seller contacted you after and offered you a second chance to buy the item? You might want to be careful, because in many cases, it's a scam.

After you lose an auction, you receive an official looking e-mail offering you that second chance to buy the item you bid on. Click on the link and you're taken to a site that looks like EBay, where you give your credit card details or arrange to send your money, believing you're buying the item.

The problem is, the site isn't real. Instead, although it looks perfect in every detail, it's set up by a hacker. Once you've given those credit card details, your money has gone - and so possibly, has your identity.

It's become a pervasive EBay scam. In 2004 a Welsh teenager was convicted of conning more than 100 people out of £45,000 with such a scam, and he's just the tip of the iceberg. According to computer security experts, hundreds of thousands of such e-mails are sent every month. If only a small percentage respond, that's a lot of money.

It's a variation of the scam known as "phishing," an attempt to lure you to a fake web site and steal your financial information.

What To Do If you're A Victim

Sadly, if you do become a victim of the second chance scam, there's little anyone can do to help you. Report the incident to the police, but in all honesty they don't have the resources to follow up. Report it to EBay, of course. But in situations like this, their resources are limited.

If you've given credit card information, inform the credit reference agency and your credit card company. You might be able to dispute the charge, and you should have a fraud alert placed on your credit file, as you would for identity theft.

Remember that EBay does run a legitimate second-chance service, which sellers can use when the highest bidder drops out. But always check it out carefully first - never take anything at face value!

EBay Auto Scams
Share Your Story, Join the Discussion or Seek Advice..
A variation of the 'second chance' con: Why has no one ever commented on the ebay scam which works like this: I put an item up for sale. At the same time I create a new persona, or two, or three, with ebay credentials. Or, I get friends or workmates to create one, or more. Then I, or they, bid on my item along with genuine bidders to push the price up and up and if this goes too far and the genuine bidder pulls out, I offer the genuine bidder a 'second chance' to have the item at the last bid he/she made, still substantially ( and I suspect a hell of a lot ) higher than would have been the case without the fake bids.Its a con. Its a rip-off. And theres a lot of it going on, I believe, from simple observation of my own / other bidding patterns and second chance offers. Ebay should look into it. IP addresses are not that difficult to track.Caveat Emptor
brackenfern1509 - 18-May-11 @ 8:46 PM
Title:
(never shown)
Firstname:
(never shown)
Surname:
(never shown)
Email:
(never shown)
Nickname:
(shown)
Comment:
Validate: