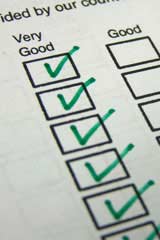 EBay traders rely not only on their goods, but their feedback reputation. Those are the comments both buyers and sellers leave on the transaction. The better your feedback reputation - which is divided into positive, neutral and negative - the more people will trust you as a buyer and seller. On the surface it's straightforward enough. But unscrupulous dealers manipulate their feedback to gain trust before ripping off trusting buyers and sellers on high-end goods.

How They Do It

How To Avoid Being Scammed

One of the most important things you can do in any EBay transaction is to check a other party's feedback. Obviously, you should avoid doing business with anyone who has a large negative, or even neutral, feedback rating. These days, however, you even need to delve beyond the positive feedback rating, especially if it involves an expensive item. These are the things you should look for:

The first thing is to report the incident to EBay itself, and also to Paypal, if you paid through their service. That offers you some recourse, and means you can file an insurance claim through them. Ultimately, however, online auctions are like car boot sales - it's a case of caveat emptor, let the buyer beware. EBay will suspend accounts where feedback manipulation is obvious, but has admitted it's a "grey area." You can use SquareTrade, a mediation service, to try and resolve buyer/seller problems but in the case of a scam, that's obviously not going to work.

According to EBay, only 0.01% of the transactions on its site are scams, and they do their best to police those. Certainly, the vast majority of people experience no problems. But always do your homework before bidding on an item, especially a high-end one.