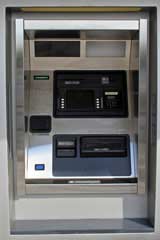 It's something you read about in the news. A person goes to use a hole in the wall cashpoint, and a few days later discovers that his entire bank account has been cleaned out. How did it happen? It's all due to a fairly new hi-tech crime called "skimming" (also known as the "Lebanese Loop"), one that's become more widespread - and hard to detect - in spite of police and bank efforts to combat it. It's a huge business - in 2003 cash machine fraud was worth £61 million.

At its heart the scam is quite easy, even if the technique is complex. The thieves attach a false front to the card reader of the automatic teller (i.e. where you insert your card) that captures your card number and transmits it wirelessly to a criminal waiting in a car nearby. They also strategically place another object - possibly a leaflet holder or something else innocuous - on the machine. Inside is a camera that captures your PIN as you type it in. That's either recorded or also transmitted to the waiting person. You withdraw your money, but the next time you use the machine, there have been a number of transactions, which have left your account empty, because the crooks have had a card made with your number on it, used to take cash and buy goods.

Variations on that include a keypad cover that captures your PIN to the lo-tech alternative someone standing close by, who looks over your shoulder and memorises your PIN as you enter it. In that case the card reader seems to "swallow" your card, although it's actually just trapped in the fake front for the crooks to retrieve later. There have even been instances of a sign saying a cashpoint was out of order and directing customers to one down the street - which turned out to be a fake.

Handheld card readers, such as in restaurants or shops, can also be used by the unscrupulous to record your card and PIN details.

In America, where there are independent cash machines, there have also been instances of the machine owners using the card information to defraud account owners. That becomes especially worrying, with machine owners being in a position to have regular access to all the information.

How To Prevent It

If the fake parts are manufactured well - and they usually are - this is a crime that can be difficult to detect. However, there are steps you can take to lessen the possibility of becoming a victim.

Chip and pin cards have certainly cut down on this type of fraud, as the chips on cards that are read by machines are much hard to duplicate. However, it has happened, and almost certainly determined criminals will find a way around this technology. The daily withdrawal limit has also helped curb this to an extent - but if it's not detected for several days, your account can still be cleaned out before you know it.